A study carried out by geoscientists and neurobiologists at Caltech and the University of Tokyo has shown that the human brain responds to changes in the Earth’s magnetic fields on a subconscious level. This may show that humans still possess a natural “compass” that helped nomadic ancestors to navigate the Earth.

Magnetoreception is a sense that enables a number of animals to perceive direction, altitude, and location through the detection of a magnetic field. This particular sensory modality has been studied extensively in animals such as migratory birds and sea turtles, but the possibility that humans also possess this ability to navigate via magnetoreception has not been studied to such a degree.

The new, interdisciplinary study was published in eNeuro, and states that it has discovered a “strong, specific human brain response to ecologically-relevant rotations of Earth-strength magnetic fields.”

Dr. Joseph Kirschvink from the US California Institute of Technology, who led the study said:

“These give rise to a brain response that is selective for field direction and rotation with a pattern of neural activity that is measurable at a group level and repeatable in strongly responding individuals.”

34 adult volunteers, 24 male and 12 female, whose ages ranged from 18 to 68, were included in the study. Each participant sat in a wooden chair, preventing any conductivity and within a Faraday cage, an enclosure that blocks electromagnetic fields. Electric currents were then run through wire coils inside the enclosure that mimicked the Earth’s magnetic field. This particular design enabled the researchers to rotate the direction of the magnetic field and measure the brain’s responses to the alterations.

Electroencephalography (EEG), which is a method of recording brain activity through sensors attached to the scalp, was used to record the brain activity of adults during the magnetic field experiments. In some participants, the experiments showed a decrease in alpha-band brain activity, neural oscillations that are thought to play an active role in network coordination and communication. 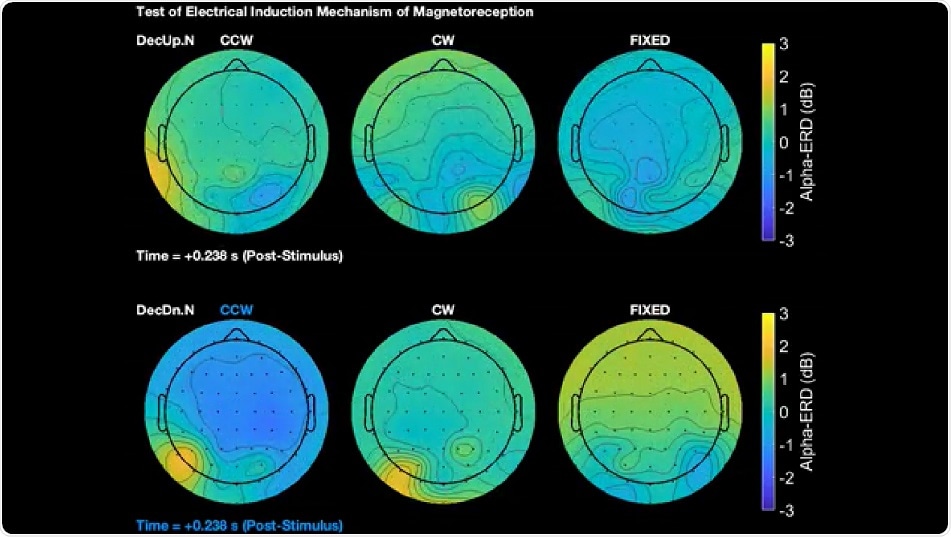 Is electrical induction responsible for the brainwave response? (Ans: no). The six diagrams show the strength of the alpha-waves (~ 10 Hz) in the human brain, at 64 locations on the human head for different magnetic field rotations; note the symbols for the nose and ears for reference. The bottom row of diagrams shows experiments with the North-seeking direction of the field pointing stably downwards at an inclination of 60? (as in the Northern Hemisphere), and the top row with the field pointing upwards. The left pair of diagrams show results from the counter-clockwise rotation of the horizontal component of the geomagnetic field (CCW from NE to NW), the middle column is the opposite rotation (CW from NW to NE), and the right shows one of the control conditions where the field did not rotate, but data are analyzed in the same fashion. Data are shown at about half a second after the field shifts (or not, for the FIXED control). Only the downwards CCW stimulation causes a significant drop in the alpha-wave band (shown by the deep blue in the lower left diagram). Note that electrical induction will depend only upon the moving, horizontal component of the magnetic field, not the static vertical component. The lack of response in the upwards CCW stimulation (top right diagram) contradicts predictions of the electrical induction hypothesis. This shows that the effect is not an artifact of any form of electrical induction, including from the electrodes on the scalp.

Researchers were able to replicate these results in participants that produced strong reactions, and were able to confirm that these responses were in fact tuned to the magnetic field of the Northern Hemisphere.

The researchers claim to have found two classes of “ecologically-relevant” rotations of Earth-strength magnetic fields that illicit significant, and crucially, replicable, effects on brainwave activity in the human brain in the EEG alpha band.

The results implicate a “biological response tuned to the ecology of the local human population, rather than a generic physical effect,” but the “full extent” of humans’ inheritance of this ability to respond to the Earth’s magnetic field has not yet been determined.

“Given the known presence of high-evolved geomagnetic navigation systems across the animal kingdom, it is perhaps not surprising that we might retain at least some functioning components, especially given the nomadic hunter-gatherer lifestyle of our not-too-distant ancestors,” researchers concluded.

Further studies into magnetoreception in human populations need to be carried out in order to reveal novel insights into the evolution and variations of this sensory system that has been evidenced in ancient populations.